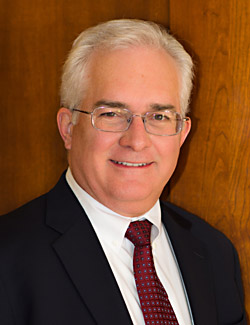 Mark Stinnett defends clients throughout Colorado,Texas and New Mexico in complex civil litigation matters involving alleged medical malpractice, catastrophic injury, professional liability, product liability, business torts, and commercial disputes.  A veteran of more than sixty jury trials, he owns an outright winning percentage in trials to verdict of better than 95%.  Mark’s abilities in the courtroom have been recognized by his peers through his selection to groups such as the American Board of Trial Advocates.

Although medical defense has comprised the bulk of his practice over the past two decades, Mark has also obtained favorable verdicts for clients in professional liability, product liability, business tort, insurance, negligence, construction, contract, and oil and gas lawsuits, and has handled significant cases involving employment, probate, trust and property issues.  He has served as an arbitrator for commercial and health care disputes and as counsel for both practitioners and institutions in medical peer review and licensing matters.

Mark serves the community through multiple national-level positions with the Boy Scouts of America, including service as chairman of the organization’s national Outdoor Programs Support Committee and as Program Task Force Chairman for Philmont Scout Ranch, the BSA’s mountain backpacking high adventure base and the largest private camp in the world.